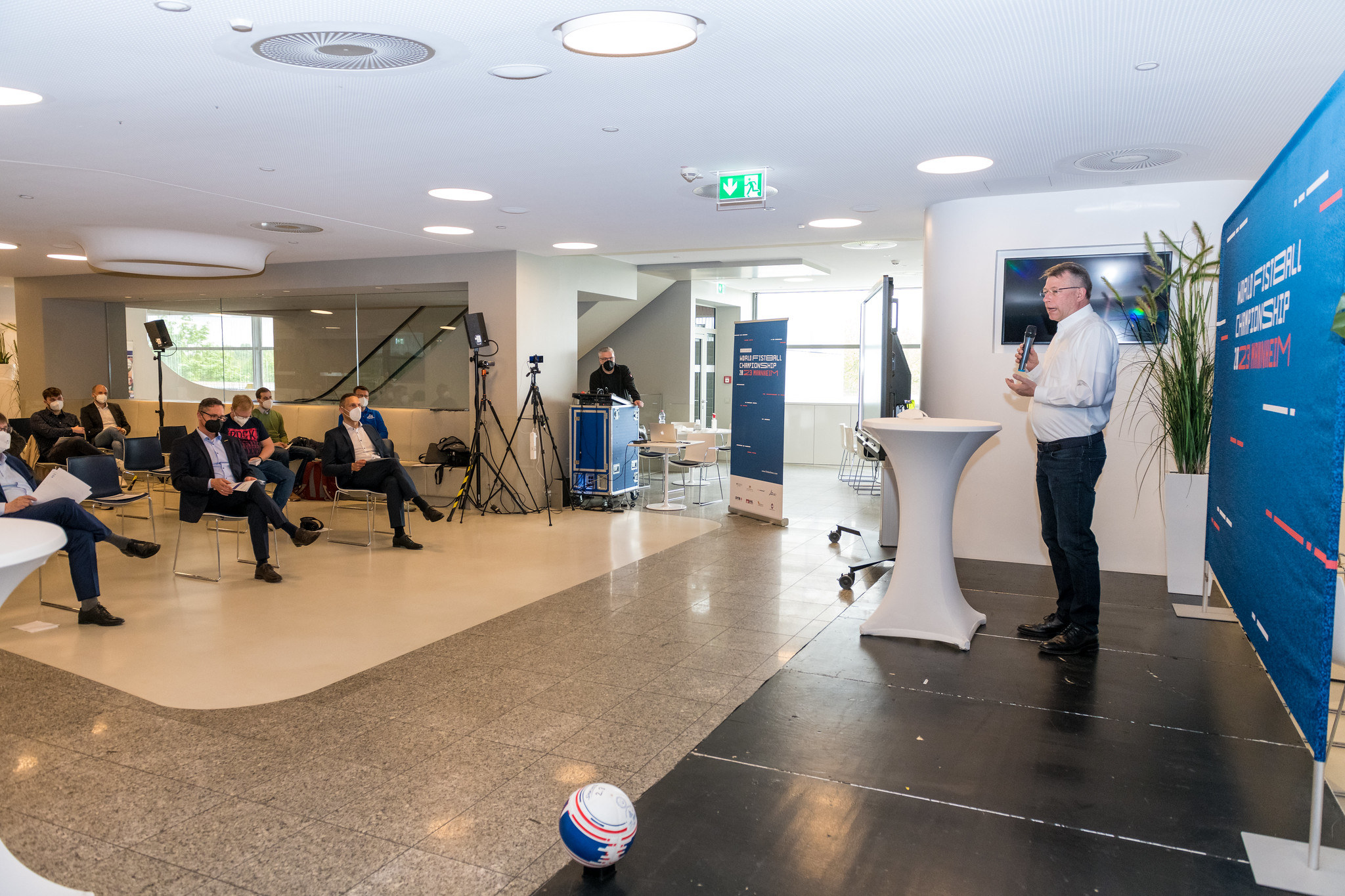 From July 22 to 29, 2023, the best Fistball players in the world will come to Mannheim. 800 days before the start of the Men’s World Championship, the City of Mannheim, the hosts International Fistball Association, the DFBL and TV 1880 Käfertal presented the official logo of the 2023 World Championship on the large video cube in Mannheim’s SAP Arena.

“Mannheim is a sports city and ball sports plays a major role in this. Mannheim is represented by teams in six of the 15 national ball sports leagues. That’s why I’m very pleased that the fourth Men’s Fistball World Championship to be held in Germany will take place in Mannheim and that we can expect 16 teams from different continents and more than 30,000 fans in our city. With the Fistball World Championships and the German national garden show (“BUGA”*= short for “Bundesgartenschau”), two major events will take place in Mannheim in 2023 at which we can present ourselves to our guests as a cosmopolitan, livable and sustainable city,” says Mannheim’s sports mayor Ralf Eisenhauer.

Verleger: “The World Championship will be different from what we have been used to”

The unveiling of the event logo took place on the large video cube at Mannheim’s SAP Arena. “We are very pleased to present the official event logo 800 days before the start of the World Championship. Our logo is different than what people have been used to because the World Championship is also different than before. The final phase in the SAP Arena on natural lawn is extraordinary for Fistball as an outdoor sport. The different shapes and widths of the letters represent a Fistball playing field as well as the City of Mannheim and the teams that bring the field to life. The colors symbolize the organizers: red for Mannheim and the DFBL, blue for the IFA and both together are also present at TV Käfertal,” explains IFA President Jörn Verleger.

The striking shape of the letters is very impressive, but stimulates interest. For the first time, an own font was created for a Fistball world championship. “This font will run through the World Championships and has a high recognition value,” says Jörn Verleger.

At the same time, the 2023 World Fistball Championships will feature a highlight that has never been seen before in the sport of Fistball. “After the preliminary round in the Rhine-Neckar Stadium, the games up to the final will be played in the SAP Arena. In a unique setting, the new Fistball world champion will then be determined – hopefully in front of a sold-out crowd – in front of more than 11,000 fans,” said Trinemeier.

Löwe: “The Fistball family is expecting a special week”

This special atmosphere also fuels a certain expectation, as the co-coach of the German national team Chris Löwe knows: “As the world’s largest Fistball federation, we certainly have a great expectation from our own ranks, especially since we now certainly have a different role in the ranking compared to 2007. Our own expectations of the organization, fans and media are also not exactly low. We have to take the impulses we give each other and turn them into positive energy. The team, the organizers, the federation and of course the Fistball family is expecting a special week.”

The national team players in attendance fully agreed with their coach. “The anticipation for the 2023 home World Championship in Mannheim is huge. For me, it’s especially special that the World Championship is only a few kilometers away from my home in Pfungstadt and that family and friends can be there live. It will certainly be a real witch’s cauldron that everyone involved will not forget in a hurry. We’ve won a lot with the national team in recent years, so you always have to set yourself new goals. The World Championship in your country makes it very easy to motivate yourself week after week in training,” knows Germany’s main attacker Patrick Thomas.

“A World Championship in your own country is a dream in itself for every athlete. The different venues as well as the BUGA 2023 in Mannheim, which will take place in parallel, will be a spectacular visitor magnet. I am looking forward to great World Championship days in the cosmopolitan city of Mannheim,” added defender Felix Klassen of TV 1880 Käfertal. With Klassen, Nick Trinemeier and Marcel Stoklasa, three Mannheim players have the chance to qualify for the World Championship squad.